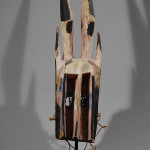 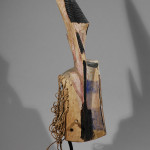 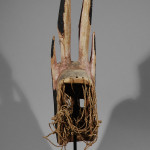 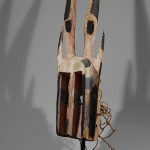 Antelope masks like this fine old piece, are admired by the Dogon for their beauty and the strength of their performance. The Dogon used this cubistic Walu mask during ceremonies to commemorate the origin of death.

The antelope is a dominant figure in the Dogon Culture. It is the symbol of the hard-working farmer in the dry agricultural region which the Dogon inhabit. The masked dancers strike the ground with sticks, imitating a strong antelope vigorously pawing the ground, evoking the diligent farmer hoeing his fields. The dancers belong to a society of masks, called Awa, which is composed of young men who perform at funerals and end-of-mourning ceremonies to chase away the ghostly spirits of the departed to the wild bush outside the village.

When the Dogon people first arrived to the cliff of Bandiagara in the 15th century, they found the Tellem people already living in the area. The Tellem built their houses on the face of the cliff around natural caves. The cliff provided protection from enemies and the weather and living on the cliff freed the land of the plains for agriculture. The Dogon also learned to build in this way and the protection of the cliff is one reason why the Dogon have been able to preserve their culture throughout the centuries. The Dogon build their houses and villages in a strict cubistic style and it is interesting to see how the face of this mask using a rectangular box replicating Dogon architecture.