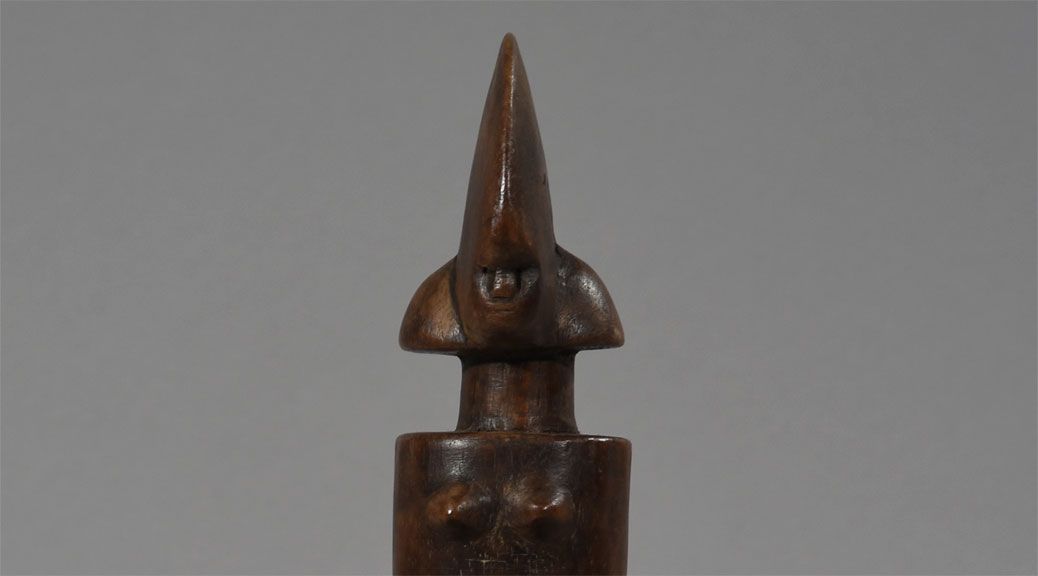 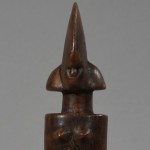 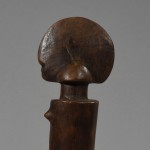 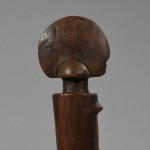 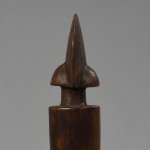 This is an unusual fine, old Mwana hiti fertility doll from the Wajaramo tribe in Tanzania. Unusually well carved in a dark brown, shiny surfaced patina. The ‘doll’ itself is special. Note the abstract, cylindrical female body shape with the two small bulging breasts. The lofty crested hair style and the cute little face but also the fact that she is placed on a ‘pedestal’ in the shape of a tree-legged stool makes her more special.

It is obvious that the quality of this fertility figure shows that it is wealthy parents to the girl that has given this doll as a present after her initiation.  As a tradition, the girl will treat the doll with motherly care. She will wash the dolls, carry them around, put them to bed, dress, and even “feed” them hoping to conceive her own child when she is sexually mature and marriageable and hope that her that her future child would be born healthy.

The term mwana hiti loosely means ‘child made of wood,’ and refers to iconic figures that depict a highly stylized female torso. The figures are commonly referred to as ‘dolls’ but they are anything but dolls as they play significant roles in the spiritual lives of a wide range of ethnic groups in Tanzania. They are almost exclusively used by female initiates during seclusion and coming out ceremonies. Smaller ones are often worn as amulets by women wishing to enhance their fertility. The figures are also found on thrones, stools and staffs of the region and often times represent ancestors and are depicted in pairs. (Quote of Felix, March in “Mwana Hiti : Life and Art of the Matrilineal Bantu of Tanzania / Leben und Kunst der Matrilinearen Bantu von Tansania”.

Condition: Despite age and constant use, there are no cracks or other damage to see.

Jim Ross, (8/24/2010): Another similar object is in the collection of the Minneapolis Institute of Arts (Accession Number 98.24.2) and is labeled on the museum’s website as “Mwana nya nghiti.”