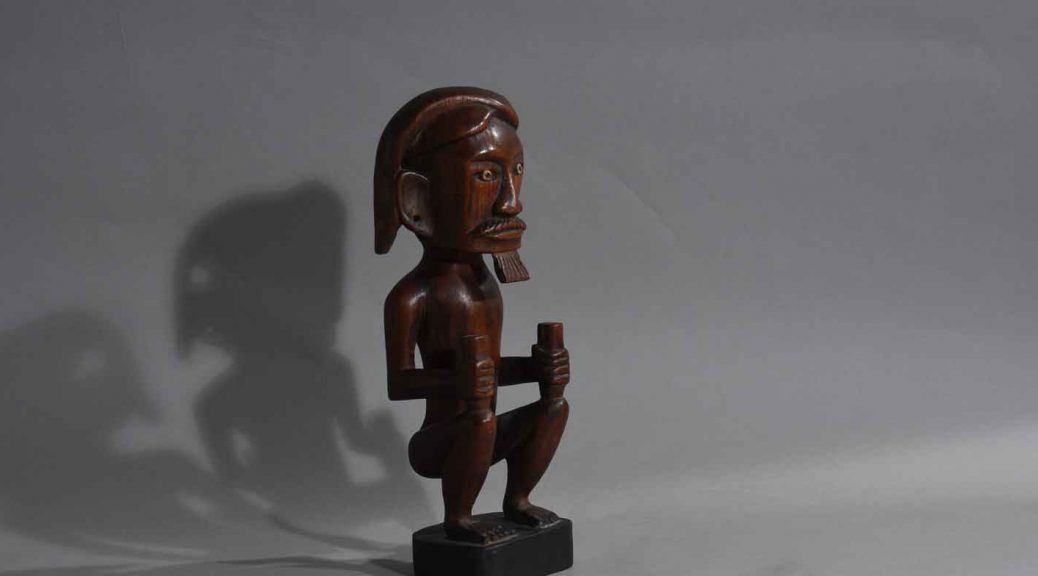 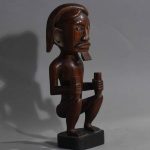 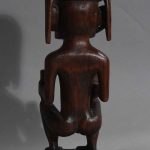 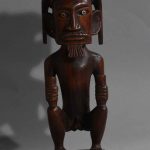 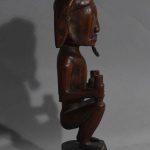 This finely carved, seated, serious male figure in light brown wood is a typical ‘Adu Nuwu Ancestor Figure’. His fine beard, the finely inlaid carved, bright eyes made of bone and the neatly folded headscarf make up a fantastic whole. In his hands he holds the religious symbols. These wooden figurines, “ancestral spirit”, was used as a receptacle for the soul of the deceased. The statuettes received offerings and, in exchange, had to bring prosperity and play a beneficial role for rites of passage.

Ancestor statues like this used to be made after a parent passed away and kept as representations of the deceased person. Nias people believed that the spirit of their ancestors still remained inside the wooden sculpture. An old traditional house could contain many such statues.

Many ancestor statues were destroyed during the “great penitence” religious movement that swept Nias in 1916. As symbols of the old religion of ancestor worship, they were seen as blasphemous idols. Many were also sold to collectors and can now be found in museums and private collections all over the world.

The people of Nias believe that the spirits of the dead have supernatural power and that they are able to influence the living in a positive or negative way. By venerating “adu zatua”, wooden images carved in their likeness, they try to appease the spirits and keep them well-disposed.

Condition: Despite the age, this figure is in an unusually good condition, no damage, cracks or insect bites.