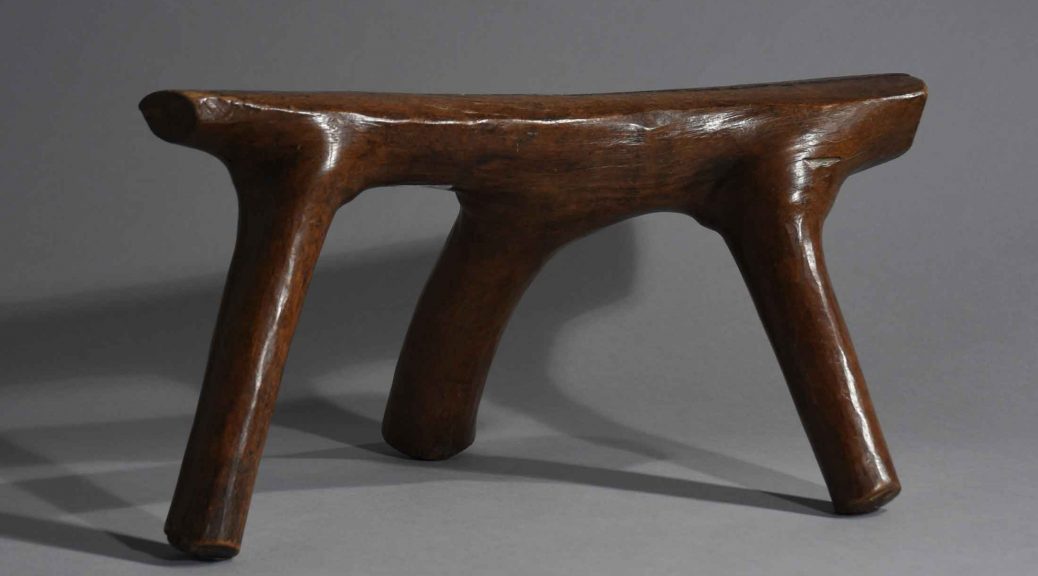 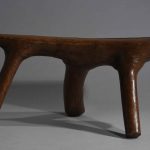 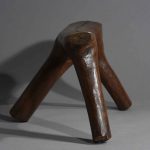 This charming, elegant three-legged headrest is via its simple design a well-known example of the arts of the Dinka Lotuku people of South Sudan.

The Lotuka people live in settlements. There are sixteen known such villages of which Iliu, Hiyala, Lobira, etc. are the most important in terms of their population dominance. The Lotuka number approximately sixty-nine to seventy thousand according to the 1983 population census crowded in the sixteen villages and Torit town.

Mythology and history of the Otuho (Lotuka) people are described as having no traditions of an extraneous origin. Iliu, according to Lotuka’s tradition, near the south end of the Lopit Mountains was their original home. However, the lack of water drove the Lotuka to Imatari where a Chief called Ngalamitiko, who figures largely in their lore, ruled over them. When Ngalamitiko grew old the people wished to replace him by his son Loghurak.

Loghurak requested them to wait till he had deceased, they refused insisting that he should abdicate in favour of his son – a rebellion by the younger generation. He, therefore, sent ‘his dog’ with a message to the Chief of the Akara urging him to destroy Imatari. The Akara, who came with a vast army only after his death, destroyed Imatari, and slaughtered the Lotuka.

The survivors fled in different directions and settled mostly in places they now occupy between the Lopit and Dongotono Mountains, Torit, east bank Equatoria. The Lotuka history is that of internecine warfare among its different clans punctuated by combined raids. The Dinka are a herder Nilotic group which is a group of peoples from the Nile Basin speaking Nilo-Saharan languages which are part of the northwestern Congo, Western Ethiopia, Southern Uganda and Kenya, northern Tanzania, and southern Sudan. These groups move according to the seasons from place to place in the search of water and gazing land for good pasturage. The Dinka inhabit the vast savanna of southern Sudan in Africa. Although the Dinka are the largest ethnic group in Sudan, their historical background remains obscured. As far as we know, the Dinka settled in the area around 1800 and often in conflict with their neighboring peoples, such as the Atuot. Their reputation as redoubtable warriors comes from their successful defense against the Ottoman centuries ago. Being a Valiant warrior is an important value the Dinka transmits to the youth. This value is taught through the initiation of young boys. At the end of the initiation, the boys are presented with a spear, a club and a shield, the equipment of a warrior.

The lifestyle of the Dinka is that of the nomad and herders. Today however, Dinka people raise cattle and practice agriculture. Dinka personal and body adornments are among the most astonishing on the continent. The Dinka nomadic lifestyle is reflected in their art. In fact, the Dinka have excelled in the production of small objects, easy to carry. Stools and headrests are among these precious objects. Dinka headrests, also used as a stool or neck rest, are carved from a single piece of yellowish to brown wood and consist of three to four-legged stable seats, carved separately from one another. In most of the cases they are made from one piece like this one. The seats have various forms and are usually curved with rounded corners, slightly concave along its length and convex across its width. Some have zoomorphic motifs which include birds, antelopes, and giraffes.

These stools and headrests are known as thoch (stool) and used as both headrest and seat by elderly men and women. They are also used to protect elaborate coiffure. In Dinka society headrests are very personal items. They are believed to embody the soul of the owner.

Condition: Despite age and diligent use, this headrest with its deep brown color is in an exceptionally good condition. A pair of “natural” cracks in the wood do not spoil the appearance of this elegant use object.