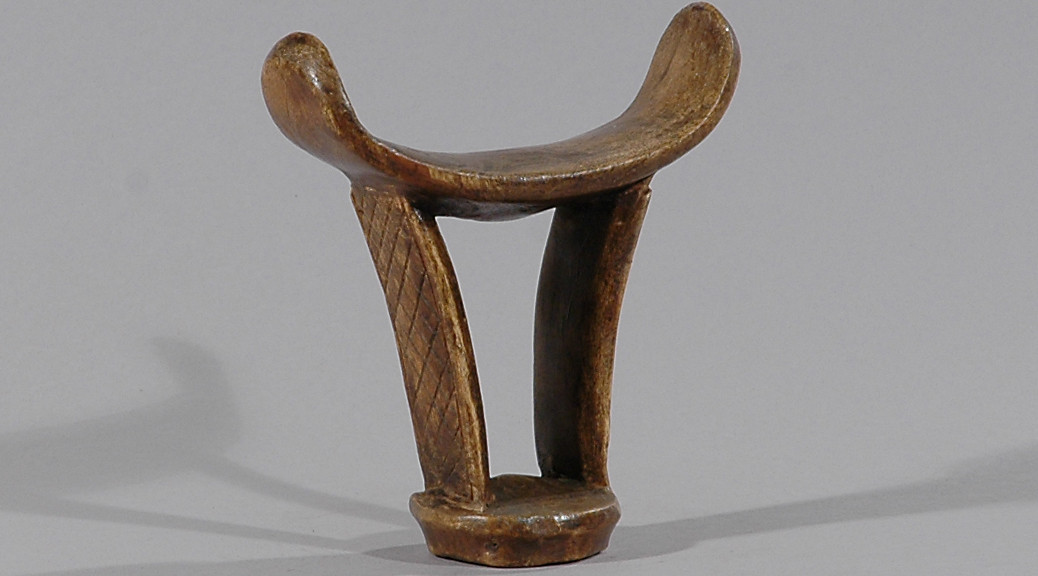 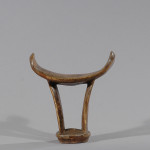 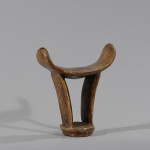 Men in East Africa use headrests both as pillows and as indicators of status. This type of man’s headrest is used by the Boni of northeastern Kenya and southern Somalia and by Somali nomads. Men’s headrests generally feature a smaller base that makes them somewhat unstable to sleep on, while the rectangular bases of women’s headrests are usually more stable. The small, easily unbalanced base has made the headrest an emblem of alertness and the ability to wake to action. Made of sturdy but relatively light wood, the headrests are used on beds and are carried by herdsmen, who also use them to rest while keeping an eye on their herds. Boni shepherds rest while standing on a single leg, with their head lying on the neckrest set on their shoulder. These neckrests symbolize vigilance because since their base is so small, the resting person could not fall asleep without falling over.

The patterns on Somali and Boni headrests probably reflect the Islamic influence in the region. Some scholars interpret the patterns and iconography as a “form of shorthand for a prayer,” to ensure God’s protection of the sleeper. Headrests also play an important role in the nuptial ceremonies of Somali nomads. On his wedding night, the groom places the tubash (a sum of money) under the bride’s headrest. The morning after the marriage is consummated, the bride will use this money to purchase an amber necklace, the symbol of her new status.

The headrests are carved from a single piece of fine-grained wood known as hagar in Somali, or also yucub wood. The wood is usually left its natural color, but is sometimes painted red or black by its owner. They may be carved by the owner or commissioned from an artist.

Somali and Boni nomads make use of two types of headrests; one with a single cylindrical supporting column and one with a double column. It appears that the different styles are for men of different status, with the single-columned variety for young men and the double-columned variety reserved for elders. The more elaborate the headrest is, the higher the status is of its owner.