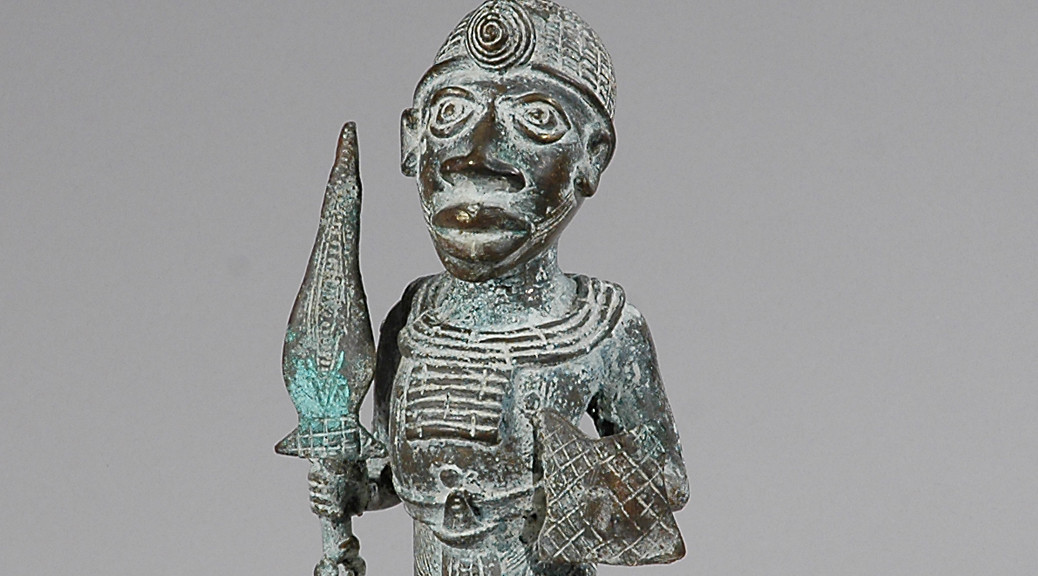 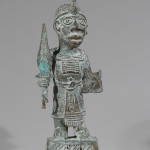 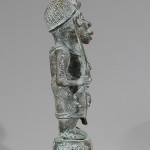 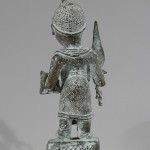 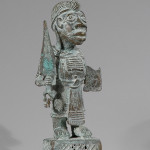 This fine Benin Bronze Warrior is guarding the king, or Oba who has reigned, with his ancestors, from the 15th century. Styles have changed over the years. Although similar to many older works, this is a newer piece. It was sculpted by hand, then cast in bronze by the lost wax process.
The Benin People and their bronze art.

The fame of Benin, located on the edges of the delta of the Niger River, rests on the works of traditional art produced over the last 600-700 years at the capital, Benin City. At its height, the kingdom extended some 500 miles west into Dahomey and to the Niger in the east. For the Edo inhabitants, political organization centred on the king and his court, and it was the Oba, or king, who was both the temporal and spiritual ruler of his subjects.

The Portuguese “discovery” of Benin in 1485 seems to have occurred at the height of Benin’s political power, and the impact of European contact can be seen in terms of religious conversion, assistance in warfare, and the introduction of European goods, including guns and supplies of brass. Originally used to cast cannon, this brass acted as a catalyst on Benin art, as it increased the supplies used in the production of bronze sculpture, the supreme material expression of Benin ideals. The extraordinary bronzes of the Benin kingdom in what is now Nigeria exhibit a virtuosity and sophistication of style that has astonished the Western world since they were visited in the 15th Century. Their work was brought to Europe following a punitive expedition by the British in 1897, causing a great sensation.

The people of Benin are known for their remarkable bronzes. Almost all Benin art was created to honour the Oba, who has reigned, with his ancestors, from the 15th century. Styles have changed over the years. Although similar to many older works, the pieces in the gallery are all 20th C. pieces. Each is unique, sculpted by hand, and then cast in bronze by the lost wax process, also called cire perdue.

The lost wax process involves the making of the item in wax first. Clay is packed around the wax, then the wax is melted out of the clay, and molten bronze is poured into the hollow mould.

Provenance: Acquired in 1997 from Johannesburg gallery