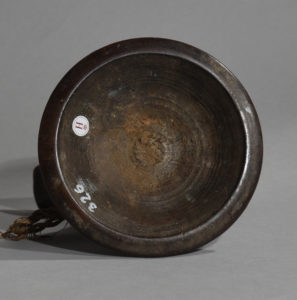 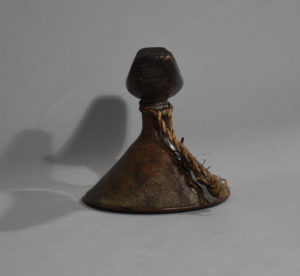 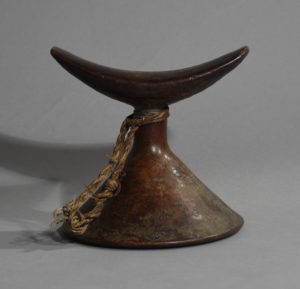 This fine and rare Ethiopian Headrest originates from the Guragé tribe that lives in a semi-mountainous region in southwest Ethiopia, about 125 kilometers southwest of Addis Ababa, bordering the Awash River in the north, the Gibe River (a tributary of the Omo River) to the southwest, and Lake Zway in the east.

For Ethiopian men, headrests were a very personal and prestigious property. He wears his headrest where he walks in a chain or string. It is personally ordered from a carver and remains his property until he dies. The purpose of the headrest is popular to protect themselves from attacks by snakes, scorpions and other critter, another purpose is to protect the often-elaborate hair styles. A belief that the larger and more elaborate hairstyles means greater contact with his ancestors. The reality, however, lies not in the hairstyle but the fact that it is in fact ‘dream vision’ which he gets by light sleep. Since one cannot enter a deep sleep balanced on a headrest.

When the owner passes away, he is either buried with his headrest. Or his headrest is broken into two or more parts. Finally, there are family members who see a value in selling his property.

Condition: Despite age and diligent use, this rare headrest with its dark-brown glow appears in an exceptionally good condition. No notches, cuts or insect bites.

Proveniens: Acquired at an auction of HRH Prince Henrik of Denmark collection. The headrest carries the Prince’s monogram affixed to the bottom of the headrest. It is believed that the prince has acquired the headrest from a German collection (from other parts of the prince’s collection originates).