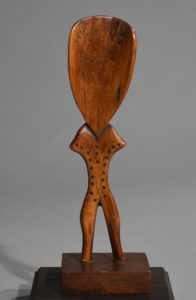 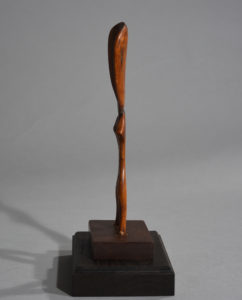 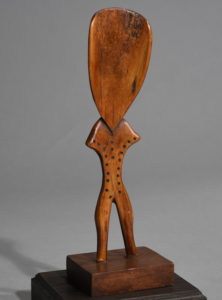 This antique, elegant and almost gracefully crafted spoon is carved from elephant (loxodonta africana) ivory and evokes the stylized “Kalukili” character. It has a beautiful patina and it shows signs of age, wear, and natural abrasion.

This striking ivory spoon, supported by a finely crafted handle decorated with characteristic pointed patterns, was made by the Lega people of the DR Congo and is much more than a simple utilitarian object.

The Lega people are amongst Africa’s best-known carvers and artists. Currently settled in the Kivu province of the eastern DR Congo, they believe themselves to be descended from an eponymous ancestor who migrated into the area from what is now Uganda. They are also known as Warega and Balega, based on corruptions of their actual name by neighboring groups and Arab traders, respectively. They live in small villages and consider themselves parts of distinct lineages, although to outsiders the “Lega” group is a well-defined unit. They are further defined on the basis of their modes of subsistence. The western Lega settled in the forest (malinga), where they rely on hunting and gathering, while the eastern groups live on poor soils, further denuded by their mode of slash-and-burn agriculture.

Spoons were sometimes used outside of Bwami society by old men for eating. Spoons were symbols of lineage continuity and the memory of one’s ancestors’ achievements. Spoons have multiple forms, meanings and are used in a variety of ritual contexts by individuals in ranks other than Yananio and Kindi. Some spoon owners were responsible for organizing the circumcision rites where boys become men and are thus eligible for Bwami membership.

Condition: Good condition overall hairline stable cracks. Wear consistent with age and use within the culture.