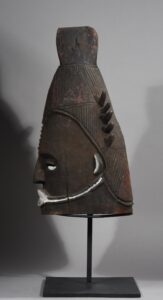 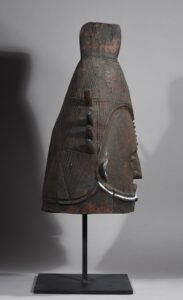 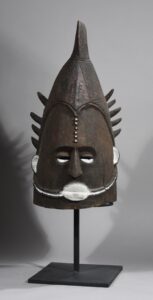 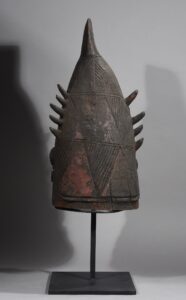 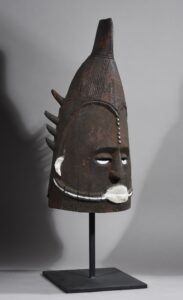 This rare Ibo Helmet Mask originates from the northeastern part of Nigeria. The mask consists of a conical shape decorated with horizontal ‘pins’ that protrude on each side of the illustrative hair which is gathered in a ‘knot’ at the top of the figure. The face features the characteristic ‘sleepy’ lowered eyelids. The ears and mouth are carved and painted white with a thick layer of kaolin.

In the North we have the Igbo Mmo society that represents the spirits of deceased maidens and their mothers with masks symbolizing beauty. Common characteristics found on the masks are- finely sculptured feminine features which are accentuated by tattoos.

In the South we find the Ekpe society, introduced from the Cross River area. They use contrasting masks during ceremonies; two examples are maiden spirit mask representing beauty and peacefulness, and the elephant spirit, representing aggression and strength. The Okorosia masks, is similar to the Mmo of the Northern Ibo.

Decorative objects by the Igbo people date back as far as 900AD and were made from leaded bronze and copper objects.

Over the years Ibo people have embraced a great variety of beliefs and art styles from neighboring tribes. The wide variety of cultural influences from regional tribes creates rich cultural diversity and Igbo worship, this is clearly depicted in the ceremonial rituals, artistic creations, music, and song and dance.

The Igbo people are a large but widely spread population that inhabits both sides of the Niger river. The river with its fertile surroundings, provide ideal agricultural farming land to all the inhabitants.

the Nigerian Civil War or the Nigerian-Biafran War, lasted from July 6, 1967 until January 15, 1970, after which the federal government re-absorbed Biafra into Nigeria. Several million Eastern Nigerians died from the pogroms against them, such as the 1966 anti-Igbo pogrom where between 10,000 and 30,000 Igbo people were killed.[101][102] In their struggle, the people of Biafra earned the respect of figures such as Jean-Paul Sartre and John Lennon, who returned his British honor, MBE, partly in protest against British collusion in the Nigeria-Biafra war.[103] In July 2007 the former President of Biafra, Late General Emeka Odumegwu-Ojukwu, renewed calls for the secession of the Biafran state as a sovereign entity.[104]