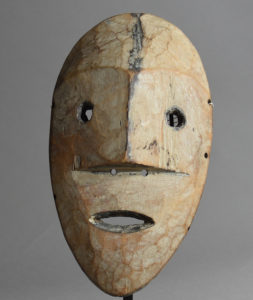 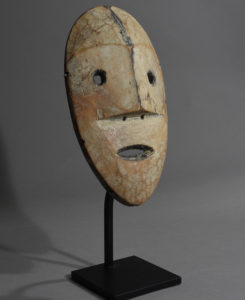 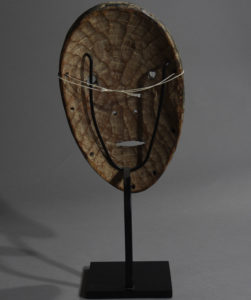 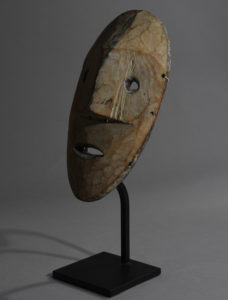 This highly stylized mask. Nearly ‘modern’ in its simplified and simple terms has been used in ceremonies in honor of historical figures in the Bwami society of the Lega peoples. The teachings of Bwami permeate all aspects of life, guiding the moral development of the individual and governing relations with others. ‘The genius of the Lega artist lies in taking the needs of the Bwami patron and producing a unique artwork that fits carefully within the canon. Each mask, for example, is unmistakably Lega in style and carefully fits within the confines of Bwami, but when placed with others, its uniqueness can be seen by the critic from an artistic point of view. When connoisseurs try to define Lega style, however, they find it almost impossible. The forehead bulges, except when it is flat; human faces, especially those depicted as masks, are heart-shaped, except when they are not. As aptly summarized by Ralph Altman, “Balega art . . .consists mainly of an infinite number of variations of a few motifs and forms of sculpture.”‘ (Art of the Lega, UCLA Fowler Museum, 2001, p. 67)

Daniel Biebuyck (Belgian professor at University of Delaware) notes, “All Lega carvings are made for the Bwami [the central, all-pervading, unifying institution in Lega society], used, owned and understood only by the higher membership. In the final initiation rite of the highest order, the artworks are no longer interpreted; they are seen as a revelation, inspiring pure contemplation.” (La Sculpture des Lega, Galerie Hélène and Philippe Leloup, Paris/New York, 1994, p. 42).

This Mask made of wood covered with white caolin and unlike many masks in other African cultures, the masks of the Lega are not usually worn over the face, they are attached to the body, held in the hand or simply hung on fences during the initiation ceremonies of the Bwami society.