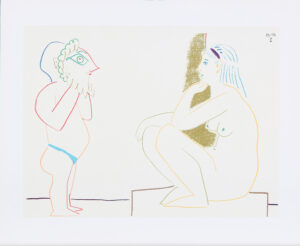 Signed in the print Picasso. Silkscreen in colours.

In the period between November 1953 and February 1954, Picasso performed an extraordinary series of drawings, collectively known as “La Comedie Humaine”. Inspired by the French author Honoré de Balzacs (1829-48) which consisted of 91 finished works (stories, novels or analytical essays) and 46 unfinished works (some of which exist only as titles). It later became five plays and a collection of humorous tales.

The suite addresses the relationship between a painter and his model, which was one of the definitive themes for Picasso. There is a wonderfully free-flowing progression from one drawing to the next, and through them Picasso explores the intimacy of the interactions between the two characters.

As with any moment of evolution in Picasso’s art, his objective reflection was stimulated by changes in his personal life. With her distinct ‘Greek’ profile and long hair swept back behind her head, the model we see in “Dessinateur et modèle” is a new arrival in Picasso’s imagery, and her appearance coincides with Picasso’s first encounter with Jacqueline Roque in December 1953. Jacqueline, who would later become the artist’s wife and last muse, possessed what Picasso celebrated as a sphinx-like presence and physique. The strength of the relationship between Picasso and Jacqueline was immediately palpable and is translated by the artist in these drawings with a tenderness that is at once both chaste and seductive.

In 1954, the drawings were interpreted in lithographic form and were published with an introduction by Michel Leiris, who remarked: “Painter and model, man and woman” – in the field of art as in the field of love there is always a duel between the subject and the object, opponents forever facing each other and separated by a chasm that no one, no matter how big he is, can hope to bridge over them.