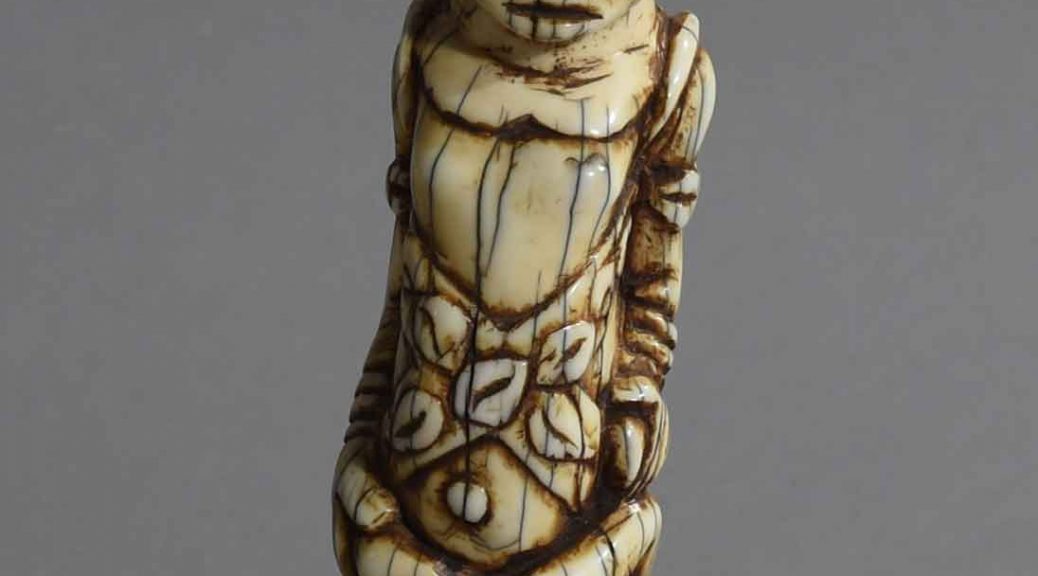 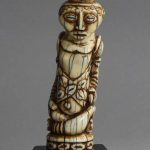 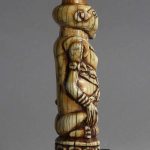 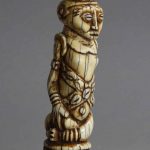 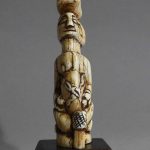 This is a unique, classic representation of a Kuba king, also named Ndop carved in hippopotamus-tusk.

A ndop is made whenever a new king is invested with office; it is supposed to be an exact replication of the king and is a soul double.  After the figure is carved, it is rubbed with camwood and palm oil to imply a reddish color.  This was believed to ensure the fertility of the king and was kept near the wives, especially during childbirth.  If the ndop became damaged at any point in time, it was to be replaced with an exact copy.  At the death of the king, the ndop is brought to the new king’s initiation ceremony; it thereby passes over all of the prior king’s power to the new king.  Once this ceremony ends, the figure is placed near the throne of the deceased king which is in a room near his grave (Cole, 384).

The history of Kuba (also called Bakuba) people are agriculturalist and a cluster of Bushong-speaking ethnic groups of the larger Bantu ethnicity living in the southeastern Democratic Republic of Congo between the Kasai and Sankuru rivers east of their confluence. They are surrounded by other tribes such as the Suku, Yaka, and Pende (Cole, 381).  Kuba who are well-known for their advance ritualistic sculptures and masks mostly made of hard wood.

When the kingdom of tribes was first brought together, the people were ruled by the Bushong people from the hill country of the central Congo (Caraway); these people have contributed most of the rulers to the Kuba.  Whenever a king dies, the capital is moved to the location of the new King (Washburn, 19).  Intertribal trading occurred often because the Kuba were such a powerful empire (Meurant, 121).  Supernatural powers are the basis for the beliefs; spells, witchcraft, and channels between the living and the dead are some of these powers.  The king is the chief of the sorcerer’s and bridges the boundary between the natural and the supernatural (Meurant , 122).