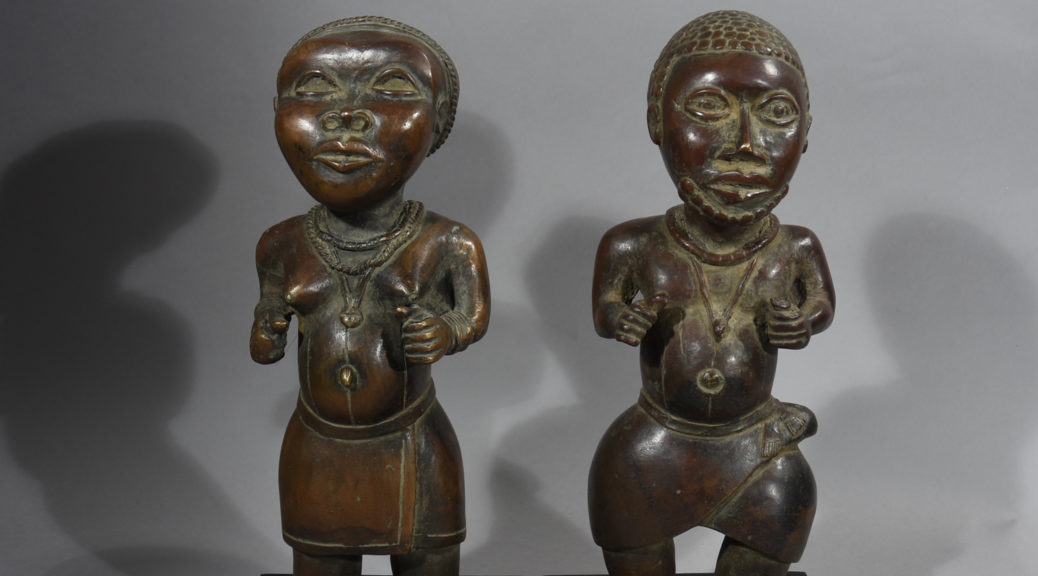 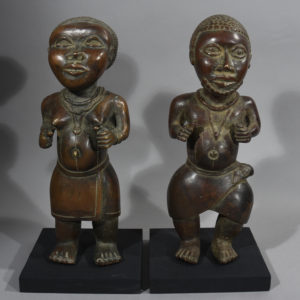 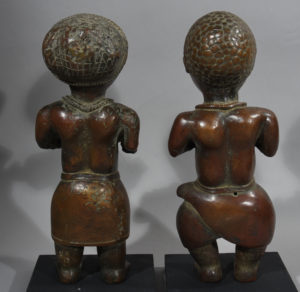 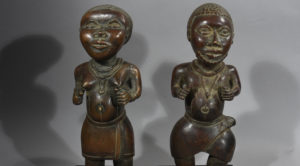 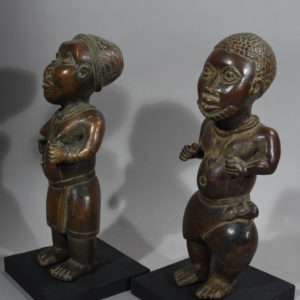 This is a couple of dwarfs who lived and acted as court jester at the Royal Ogiso court in the former Benin, now part of Nigeria. Court jester, or “fool”, was historically an entertainer at the Royal court. And it was not only at the Ogiso court that there were dwarf court jesters. Throughout history, dwarves have existed at various royal courts. But in pairs, they were very rare and special.

Already in the ancient Egyptian Herkhuf’s tomb 5000 years ago, it is deservedly mentioned that the deceased from inner Africa provided the king with a person or a few dwarfs who appeared as jester at the Egyptian court.

Court jester was also known as an entertainer during the medieval and Renaissance eras who was a member of the household of a nobleman or a monarch employed to entertain him and his guests. A jester could also be an itinerant performer who entertained common folk at fairs and markets.

The Kingdom of Benin which was located South of today’s Nigeria, is renowned for its magnificent bronzes and ivory sculptures. These artworks are one of the greatest treasures of humanity and are among the masterpieces exhibited in museums worldwide.

The Kingdom of Benin, also known as the Benin Kingdom, was a pre-colonial kingdom in what is now southern Nigeria. Its capital was Edo, now known as Benin City in Edo state. It should not be confused with the modern-day Republic of Benin, formerly the Republic of Dahomey. The Benin Kingdom was “one of the oldest and most highly developed states in the coastal hinterland of West Africa, dating perhaps to the eleventh century, until it was annexed by the British Empire in 1897.

The original people and founders of the Benin Kingdom, the Edo people, were initially ruled by the Ogiso (Kings of the Sky) who called their land Igodomigodo. The first Ogiso (Ogiso Igodo), wielded much influence and gained popularity as a good ruler. He died after a long reign and was succeeded by Ere, his eldest son. In the 12th century, a great palace intrigue erupted and crown prince Ekaladerhan, the only son of the last Ogiso was sentenced to death as a result of the first Queen (who was barren) deliberately changing an oracle message to the Ogiso. In carrying out the order of the palace, the palace messengers had mercy and set the prince free at Ughoton near Benin. When his father the Ogiso died, the Ogiso dynasty ended. The people and royal kingmakers preferred their king’s son as natural next in line to rule.

Among the most famous museum objects on the British Museum’s section for Benin art, you will find royal figures. The most cherished are the figures of Iyoba. Because she was the mother of the Oba, Iyoba was the only woman occupying a very high ranked position in the Benin royal court. Her very high rank is illustrated by bronze altar pieces and by altars representing her as a royal person of high status, with an entire set of coral beads. (Adapted from Bénin, cinq siècles d’art Royal and Trésors de l’ancien Nigéria, Musée Dapper, Paris).

Condition: Despite age, this figure with its beautiful dark brown-golden surface and a bit verdigris is in an exceptionally good condition. No cracks or cuts.

Provenience: Private French collection. Collected in situ by the owner in Benin in 1970th.