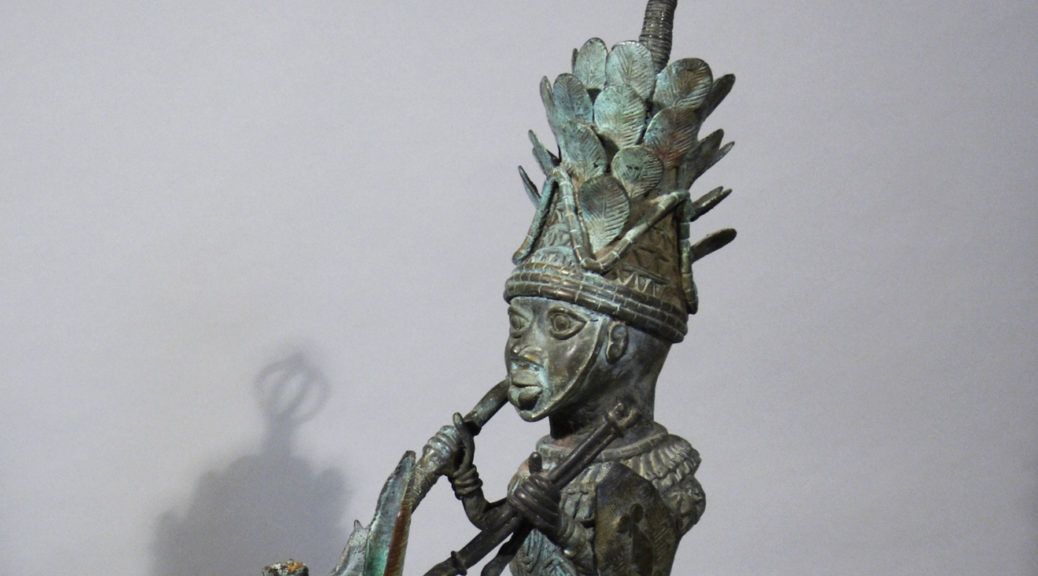 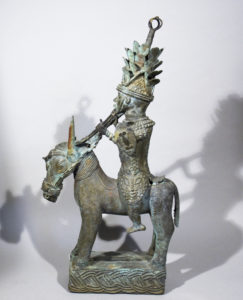 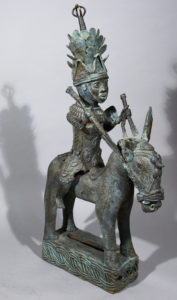 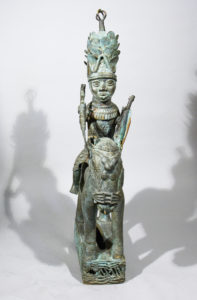 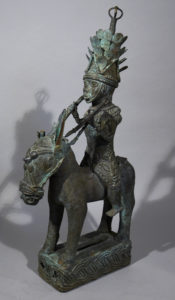 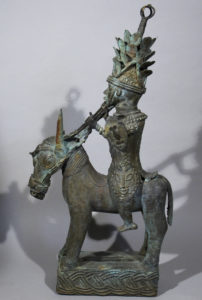 Lack of written records from many lost African kingdoms makes it difficult to identify the exact meaning of a work; in this case, the true identity of the bronze mule and rider. The figure, which may represent a defeated king or warrior from another culture, could have celebrated a great victory in battle. Or it could portray the divine king, Benin Oba, himself. Other scholars believe the rider is celebrating Oranmiyan, a prince from a neighboring country who founded the royal family.

When the Portuguese explorers and traders entered Benin City in 15th century, they were surprised to find large quantities of cast brass objects. The technological sophistication and overwhelming naturalism of these pieces contradicted many 19th-century Western assumptions about Africa in general and Benin – regarded as the home of ‘fetish’ and human sacrifice – in particular. Explanations were swiftly generated to cover the epistemological embarrassment. The objects must, it was supposed, have been made by the Portuguese, the Ancient Egyptians, even the lost tribe of Israel. Subsequent research has tended to stress the indigenous origins of West African metallurgy. Yet it was the naturalism that proved decisive. Their status was marked by the establishment of the term ‘Benin bronzes’, despite their being largely of brass. Following the bloody British punitive expedition to Nigeria, about four thousand brass, tusk and wooden objects were consigned to the Western world. At that time, western scholars and artists were stunned by the quality and magnificence of these objects, more than 1,000 brass plaques were appropriated from the Oba’s palace. Dating from the 16th and 17th centuries, these plaques were secreted in a storage room. It is thought that they were nailed to palace walls and pillars as a form of decoration or as references to protocol. They show the Oba in full regalia along with his nobility, warriors and Portuguese traders. The most elaborate ones display a procession of up to nine people, while others depict only fish or birds. The majority of everyday Benin objects were made for and associated with court ceremonies. The figures of a leopard were the sole property of the Oba – the leopard was the royal animal. Pectorals, hip and waist ornaments in the shape of human or animal heads were worn either by the Oba or by major dignitaries. Brass staffs and clippers surmounted by birds appeared during commemorating ceremonies. Despite the disappearance of the Benin kingdom, the Yoruba people living on its territory continued to produce artwork inspired by the great royal art of Benin.

Condition: Despite its age, this equestrian figure is in exceptionally good condition. That it has been in the open is clear and has left a beautiful and dressy green, verdigris surface. Single, almost unnoticed small injuries in the foundation and a small notch in the rider’s right inside of the leg. Otherwise, everything is in perfect condition.