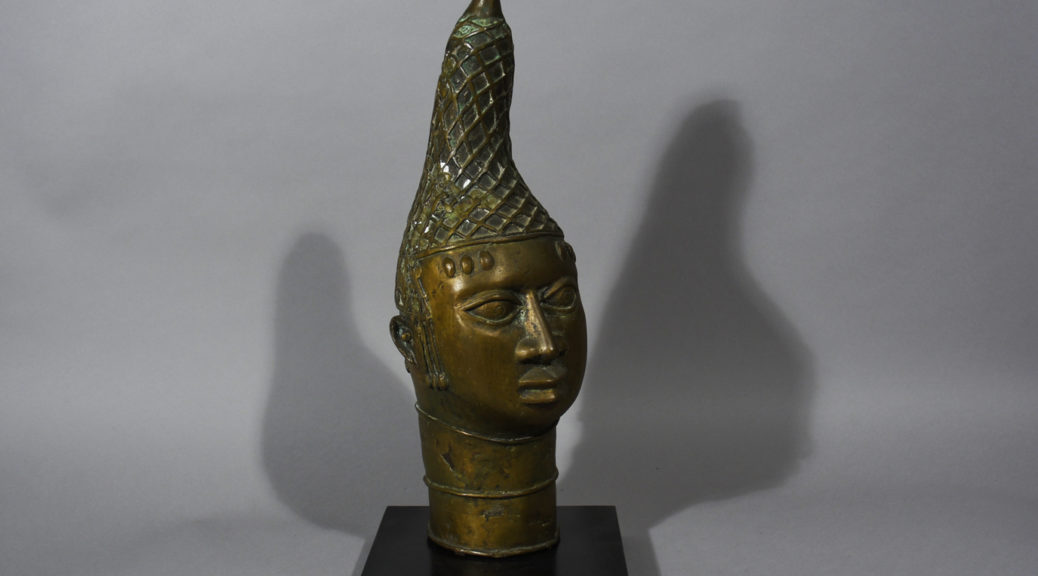 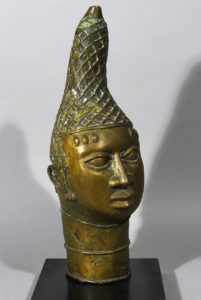 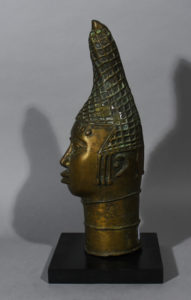 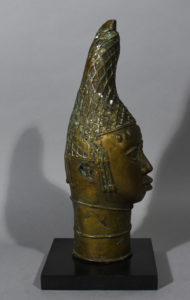 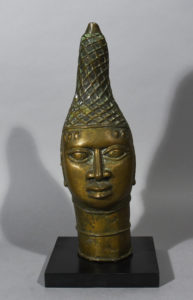 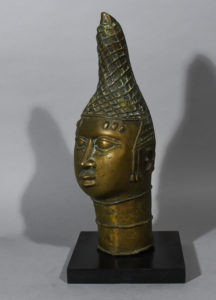 This bronze commemorative heads were once placed on altars are dedicated to past Iyobas (queen mothers). The most distinctive feature of this head is the marvelous high, forward-pointing headdress, which is a version of the elaborate coiffure known as “chicken-beak” worn by high-ranking Edo women. Her face is expressive of calmness and sensitivity befitting a person of royal rank, with wide-open eyes, full lips, a broad nose and scarification on the forehead. She wears a tight-fitting bead collar reaching to the back of the neck and below the chin. All these attributes denote high rank of the first woman among the Oba’s many wives to give him a son. She is granted the title of Iyobas seven years after her son is crowned, thus ensuring her immortality among her people.

Figure like this is made using the lost-wax casting technique (or cire perdue in French), which is the process by which a metal sculpture is cast from a vax sculpture. The work was done among the best bronze casters for the benefit of the king. Several family members held a unique position among artisans in Benin. They were a royal order, and a kind of title nobility was awarded to artisans who excelled through their work. Pieces were often collaborative, and even today there is no sure way to determine whether a piece is the creation of a single master or multiple workers. This ‘production’ was supervised by appointed ‘production managers’, and not all bronze castings were used as decorations in the Oba palaces, but sold by royal designated ‘business leaders’, who through Portuguese, French, Dutch and Syrian trading companies sold the castings to kingdoms in and outside Africa.

Condition: Despite its age, this bronze head is in exceptionally good condition. The golden brown bronze is periodically covered by a fine layer of green verdigris which gives the figure a beautiful touch in terms of age. No damage or shards.