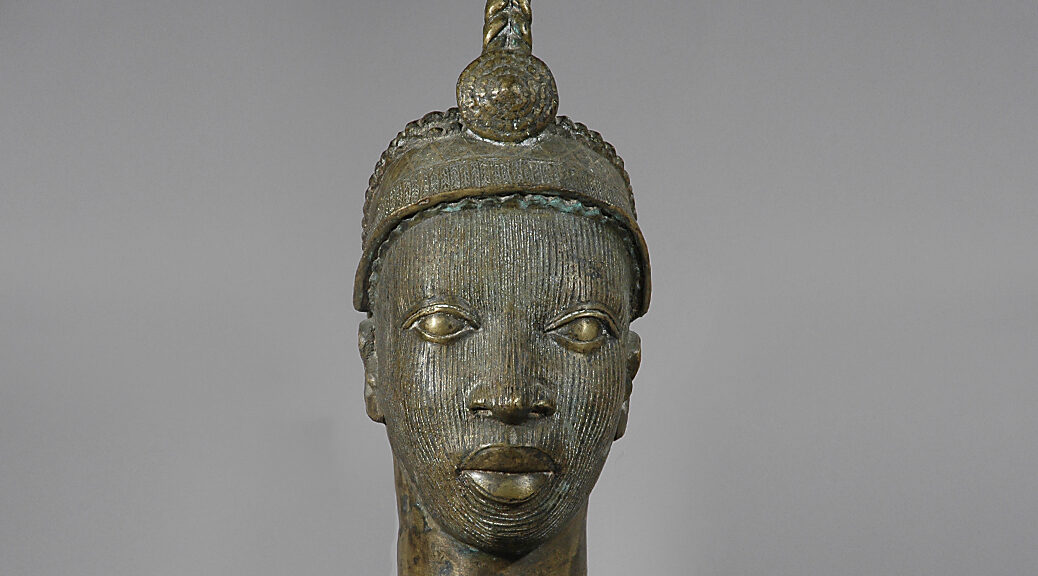 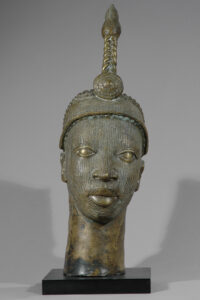 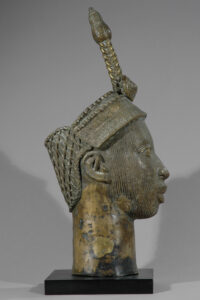 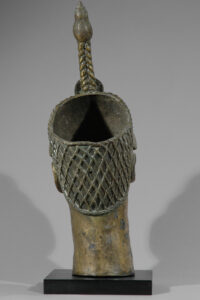 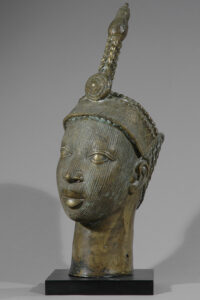 This magnificent bronze head is strikingly very similar to that of the bronze head displayed in the British Museum in London which imagines Ife Head of a Ooni Ruler (Nigeria 1400-1500 CE).

History tells that this royal head from Ife (Ile-Ife) acted as effective symbolic expressions of a concept central to Ife life: man’s activities on earth are subject to ancestral will. The living king, acting as a priest before the shrine, performed the role of an intermediary between the deceased and the living, and the head served as a vehicle for that exchange by combining memorial and communicative functions in starkly conventionalized form.

The Portuguese “discovery” of Ife and Benin in 1485 seems to have occurred at the height of these kingdoms, and the impact of European contact can be seen in terms of religious conversion, assistance in warfare, and the introduction of European goods, including guns and supplies of brass. Originally used to cast cannon, this brass acted as a catalyst on Ige and Benin art, as it increased the supplies used in the production of bronze sculpture, the supreme material expression of both Ife and Benin ideals.

When a king succeeded to the throne on the death of his predecessor, an altar was ordered where the deceased ancestor could be worshipped. Objects for this altar were carved and cast, including bronze heads in memory of the deceased, and in openings at the top of these heads were placed carved ivory tusks which leaned against the wall at the back of the altar.

The Royal Ife bronze casters, however, struck a distinctively independent path, casting the human head in a powerfully stylized view of physical form. Apart from its function as a mark of rank, the high collar of coral beads nearly engulfs the head, shaping the entire piece into a squat, cylindrical shaft, its hieratic, machine-like presence stated in remarkably simple terms. Facial and decorative features are efficiently reduced to formal essences that ornament smooth planar surfaces.

Both Ife and Benin art are the art of royalty. The fabulous bronze objects which grace museums and private collections around the world were either created exclusively for the Oba (king) or made by his artists for other important people. Through the centuries the Oba accumulated vast wealth, and each successive king turned some of his riches into an art form that has few parallels. Highly specialized artists of bronze work were brought in to live in a certain district of the city forming a guild. Before 1897 bronze objects ordered by the king were kept in special rooms of the palace. Written accounts from awestruck European visitors describe the magnificence of Benin court ceremony, etiquette and art which left them dazzled.

The Kingdom of Benin flourished from the 13th to 19th centuries in southwest Nigeria. Both Ife and Benin culture had long been the focus of attention in the Western world because of the remarkably sophisticated lost-wax bronze castings made by specialist craftsmen for the royal house, which played a variety of functions in court life and ritual.