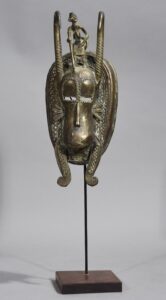 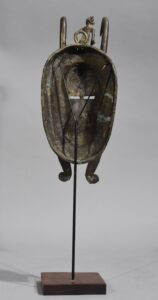 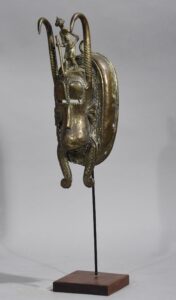 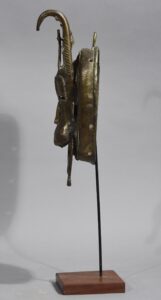 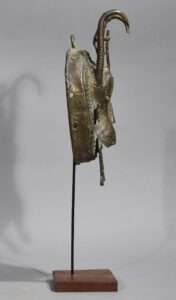 This kpeliyee mask from the Senufo people in Ivory Coast is shown in a symbolically detailed and artistically designed face.  The face is refined and well designed with curved eyebrows, a long nose, and an open mouth with defined teeth. It is an unusual example of the genre as it is simultaneously adorned with curved horns and abundant ornaments. Top of the mask features a female figure with a stick in her right hand.

Senufo live across the Ivory Coast, Mali and Burkina Faso and are one of West Africa’s most artistically important groups. They are governed by a council of elders and the Poro community and a religious foundation principle that says ancestors and bush spirits are all around and need to be reassured. This and other beliefs are visible in their works of art.

Masks include kpeliyee (for dances), buffalo (initiations), horse (celebrating Poro elders) and “firespitter” forms which are worn for crises and funerals. Healers and highly productive farmers are also entitled to wear masks. Very large kasingele (first ancestor) sculptures were placed in yasungo shrines, and also appeared in the form of birds (sejen) which are carried by initiates, and which symbolise the authority of the Poro elders (katyleeo) over their juniors (poro piibele). Sandogo divination paraphernalia is also known, while secular items are carved in a very specific manner that echo Senufo deities and spirits, thus providing an apotropaic function.

Kpeliyee (there are different spellings) masks are worn for a variety of Poro functions and can be seen by the public at certain festivals. Manners in which they are carved can betray their exact origin by means of carving method and details such as scarring. The general characteristics are similar, but with an elongated face, “horns” protruding from the chin and a series of flanges surrounding the face in the same way as a beard. The most prestigious examples are the metal versions.

Condition: This kpelie metal mask appears in a ‘golden tone’ and in perfect condition without damage.

Sunde had a “Etnografica” boutique in 1948, that became recognized among collectors as the most specialized boutique of its kind at the time. Tribal and oriental artefacts were purchased from private collectors as well as at auctions in Paris, Amsterdam and London, among other places.